(you can do this yourself using LoudTwitter) 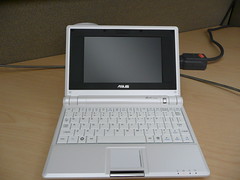 I'm posting this using Firefox running on my newest toy, an Asus EEE 701. I picked it up today just before lunch from the computer store that's Asus's launch partner on the west coast. They had two boxes in the display case, and I think I got the only unopened one. So far, it's a pretty neat device. The Xandos Linux distribution works well, and the size is very nice. The screen has a higher DPI than the Foleo screen, but fewer pixels. The keyboard is more difficult to type on, but at least it has an ESC key. It's basically a x86 laptop downscaled, where the Foleo was a PDA upscaled -- things like configuring wireless were more difficult on the EEE, but it comes with a lot more software out of the box, since it runs x86 Linux. I am noticing the heat that the 800MHz CPU produces, where on the Foleo, it never warmed up noticeably. There's a faint fan hum.

The picture was taken from my Panasonic digital camera; I just pulled out the SD card and put it into the EEE for uploading. The perspective of the picture makes the device look much bigger than it really is. It's not as wide as the Foleo, but it is thicker. The top of a closed Foleo is about level with the keyboard on the EEE. The depth is the same, but you've got six rows of keys taking up less space than the Foleo's five rows.

The EEE has no scroll wheel, but you can use the right edge of the touchpad as a scroller. I found it awkward to use in Firefox when entering text, as it would scroll the text area, then start scrolling the whole view.

More on the device as I get more time with it.
Collapse